>Click here to learn how to “Feed the Cats”

(Part-three in a three-part football series)

Conditioning is defined as “the process of training or accustoming a person or animal to behave in a certain way or to accept certain circumstances.” Sounds MISERABLE.

Bob Devaney of Nebraska was the first college AD to hire a strength coach back in 1969. In 1970, the average Husker could bench press 212 pounds and no one on the team could bench 300. The average body weight of Nebraska football players in 1970 was 212 pounds. The 2018 Nebraska roster lists 136 players with an average weight of 237 pounds.

Today, there are now tens of thousands of strength coaches and their title has now expanded to “Strength and Conditioning”. I propose they take take out the “C” word and replace is with another “S” word (SPEED). Conditioning is the act of intentionally getting athletes tired. And remember, “Any fool can get another fool tired.”

I’ve found conditioning to be the most over-used, over-valued, and counter-productive things in sport. In addition, it makes players slow.

“But we condition the shit out of our guys and we run rings around our opponents.” STOP. STOP. STOP. Yeah, you probably have good athletes and good team speed (speed reserve?). Maybe you have 23 mph guys and you’ve coached them down to 19 mph that are still faster than the other team’s 18 mph guys. Or, maybe your opponents are conditioning the shit out of their guys, too. Maybe dumb beats dumber.

“Wind sprints at the end of practice had been a part of football since its origins. They were the stripped-down essence of the game meant to increase endurance, toughness, and weed out the mentally weak and spiritually suspect.” – S.C. Gwynne, from the best football book I’ve ever read, The Perfect Pass.

It’s the irony of all ironies. Conditioning is meant to prevent fatigue, but instead, it causes fatigue. As Lombardi said, “Fatigue makes cowards of us all.”

Get fast. Play football fast to get into football shape. Stay happy. Stay healthy. Drop the chains of conditioning.

The Mythology of the Muscle Cramp

Gatorade was designed to improve the performance of the Florida Gators on hot days in “The Swamp”. Gatorade replaced what the body was losing on a hot day. It’s basically recycled sweat. Kool Aid with some salt in it.

To prevent cramps in the first game, players drank tons of Gatorade. They ate bunches of bananas (potassium). Some did shots of pickle juice (salt).

But still the muscle cramps came in the first game. Players dropped like flies. Games were won and lost due to cramping.

More conditioning!!! Damn, we need to run them more next year!

Nope. The problem is not conditioning. The problem is a lack of game-like intensity in practice. Here comes more irony… the more you condition to prevent first-game cramping, the slower you will practice and the MORE cramps you will have in the first game.

Scientific American reports, “The cause of cramps most likely involves hyperactivity of the nerve-muscle reflex arc. In this scheme, some of the normal inhibitory activity of the CNS reflexes is lost as a result of CNS fatigue or overuse of the feedback communication with muscles.”

Skip the Gatorade. Eat a banana if you like bananas. Forget the pickle juice.

Stop conditioning and start sprinting in practice. When you practice at game-speed, you acclimate the body to the hyperactivity of the nerve-muscle reflex arc. 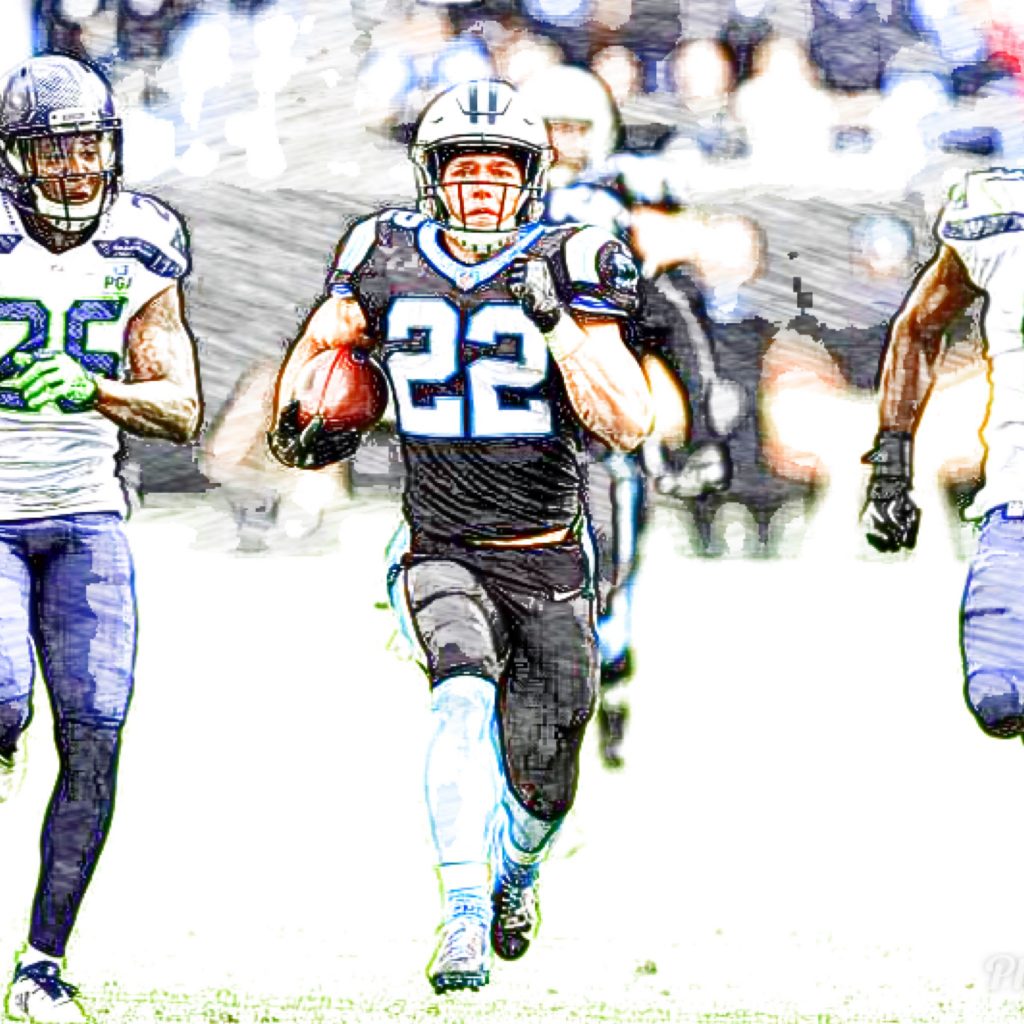 In preparation for speaking to a football-only audience next week in Montana, I’ve re-read the amazing article about the training of Christian McCaffrey. (*Feed the Cats* influenced?) The following are quotes I’m using in my presentation.

♦ “I’ve learned when I really condition myself hard, I feel myself getting slower.”

♦ “The grind makes it difficult to train your most explosive muscle fibers.”

♦ “The shift in training philosophy has involved a true appreciation for the concept of *less is more*.”

“Conditioning is an Illusion”

Jimmy Radcliffe spoke at TFC-3 three years ago. Radcliffe is arguably the most famous strength and conditioning coach in the world. Radcliffe worked closely with football coaches Chip Kelly and Mark Helfrich at Oregon.

Chip Kelly changed college football. His teams averaged 42 points per game and dominated college football from 2009-2012. Mark Helfrich was his offensive coordinator and then took the head job before getting fired in 2016. Helfrich’s teams averaged 45 ppg during his four seasons. By the way, Helfrich is my favorite NFL offensive coordinator, now with the Chicago Bears.

What was the key to Oregon’s high-powered, up-tempo offense? I bet it was tons of conditioning… aerobic training on a scale never before seen! Ironically, it was an absence of conditioning that fueled Oregon. Radcliffe explains, “Conditioning is an illusion. We are more fresh going into the game and we simply practice and play faster.” 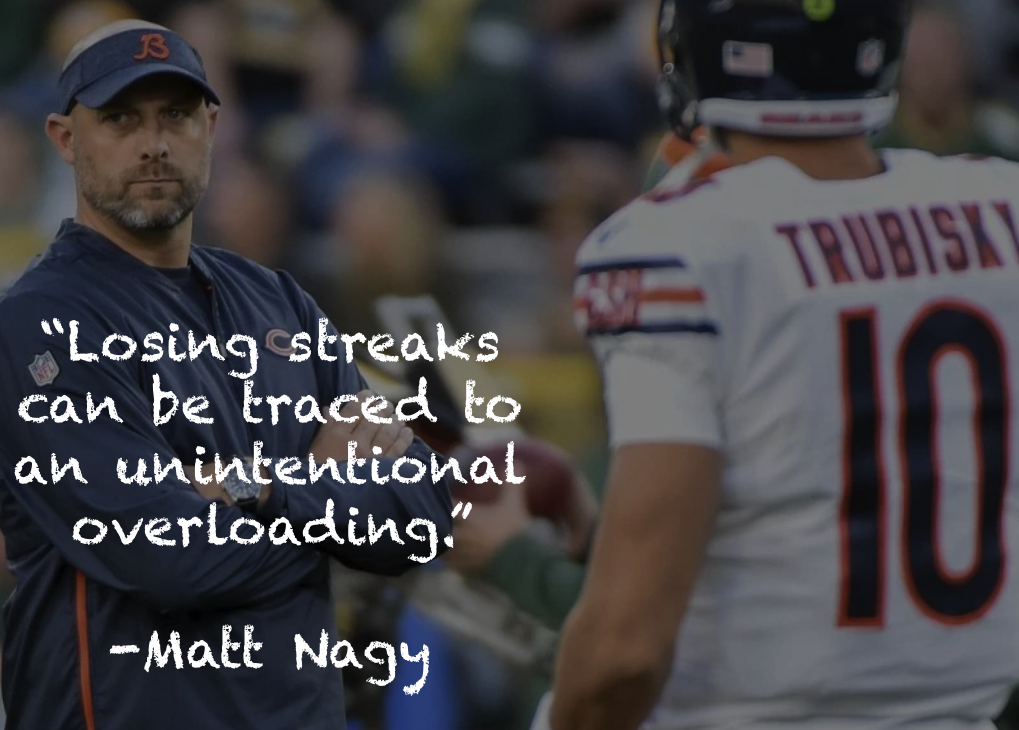 Every football player whose ever played the game can relate to Nagy’s statement. What do football coaches do when they lose? Work harder. Period. Hard work in response to a loss may cause your team to lose the next game.

Sometimes overloading is INTENTIONAL. I once witnessed a high school team losing their second game of the season, 28-21. The coaches were infuriated and blamed the loss on effort (they always do). The following game was going to be a sure-fire win, a stone-cold lock, against a school who had gone 2-18 in their previous 20 games. The coaches decided to toughen up their squad, so they put them through hell. Punitive conditioning blocked out the sun all week. No one is ever going to score 28 on us ever again! Come Friday, a broken and battered team lost 38-12.

The following Monday, there was a five-hour practice on Labor Day. The season went downhill from there. 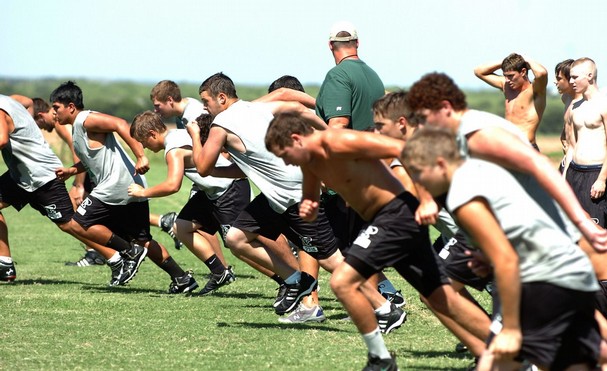 I was recently asked by a former athlete how to prepare for his college “conditioning test”. He explained that the test was 16 x 110 yards, each in 16 seconds, with 45 seconds rest. 110 yards in 16 seconds is sub-maximal for fast kids. Skill kids can run at speeds between 19-23 mph. This test requires a speed of only 14 mph. My athlete explained that the bigs had to run 16 x 90, each in 16 seconds. Anyone not passing the test had to do conditioning at 6:00 am every day during the first week of practice. Prioritizing speed?

On July 12th I tweeted this and it caused quite a stir. 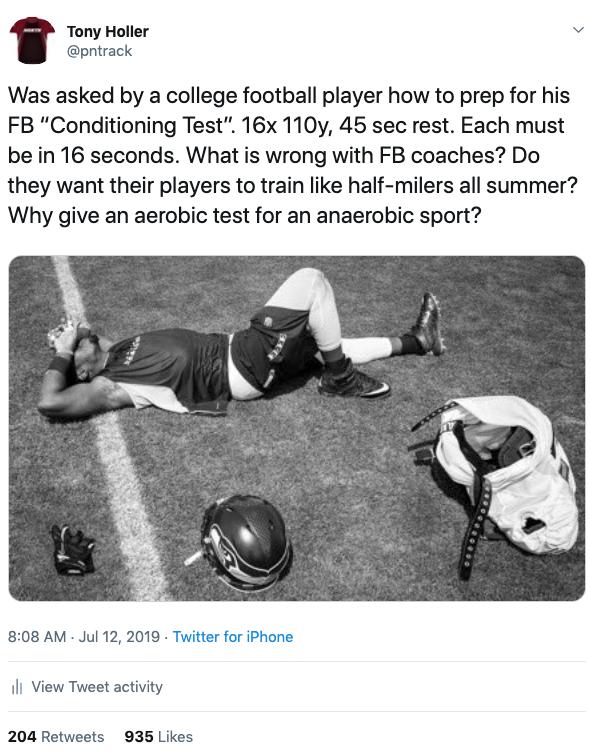 I first want to clarify something in the tweet. Yes, I understand that 16 x 110 is pretty damn anaerobic (especially for non-distance runners). I called it an aerobic test because the majority of the training for the test needs to be aerobic. If you are to survive running 16 x 110 in a 16 minute window, running at 14 mph (11.5 mph for the bigs), you better have a highly-functioning aerobic engine. If you are polluted with acidity after the first rep, you might literally die.

Call me crazy, but that’s probably another reason for not doing this conditioning test. Jordan McNair, 6’4″ 325, DIED at the University of Maryland last summer doing 10 x 110, six fewer than the conditioning test in question above. I’m so naive. I thought these stupid tests were abandoned long ago. When Rashidi Wheeler died doing his conditioning test at Northwestern back in 2001, conditioning tests should have been forever banned. Wheeler, a terrific defensive back, was required to run 10 x 100, 8 x 80, 6 x 60, and 4 x 40. Rashidi has been dead for 18 years now. I wonder if Northwestern still does the test? 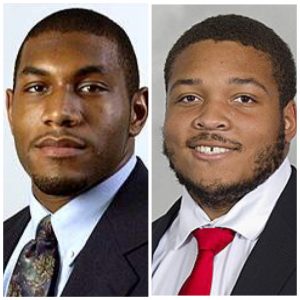 Rashidi Wheeler and Jordan McNair, gone but not forgotten.

Ok, so let’s get back to conditioning for the conditioning test. To train for 16 x 110, you better be doing 8 to 12 of these 110’s a couple times a week (specificity). You probably also need to run 2-3 miles every day. You better build that aerobic engine like a damn distance runner because 16 x 110 is EXACTLY ONE MILE of running at a mile pace of 4:16. The bigs would be running at a mile pace of 5:13. Good God Almighty.

“The more I think about the old days, the more I believe we conditioned in the summer so that we could survive conditioning during the season.” – Greg Rohr

As football players are doing misguided conditioning to survive future conditioning, guess what they are neglecting?

Invest in the things that matter.

The Argument in Support of a Conditioning Test

The following are actual responses to my tweet of July 12. Almost all of them had be be fixed grammatically. Wink.

“It has little to do with actual conditioning. It’s more about discipline, accountability, and mental toughness.”

“Instead of doing a conditioning test, I assign ten 100 yard runs for every summer workout missed. Had to be completed before first game.”

“So we need to ask Nick Saban and his strength coach why they do THIRTY x 110 in the summer and run all the stadium stairs. Alabama is the best conditioned team in the NCAA. Whatever they are doing works!”

“It’s about mental toughness, discipline, and bonding as a team.”

“Boxing is mostly anaerobic but boxers run three to six miles on most days to build their aerobic engine.”

“There’s a thousand ways to condition, use them all.”

“If you physically finish these conditioning runs, you can mentally finish long drives in the fall.”

“The good ole days… salt tablets, one water break, suspension helmets, concussions, smelling salts, one mile runs, trips to ER for IVs, 112 heat index, three-a-days, no AC in the locker room, ‘you are ok, you just got your bell rung’, … 16 x 110 was the least of our worries.”

“We ran 16 x 110 to break through mental walls. Our kids fed off of knowing we were in better shape than our opponents.”

“Training aerobically increases overall work capacity and lactate threshold which are the most important parts of a football game on a play-to-play basis.”

And my favorite response…

“You are a snowflake.”

♦ Football Coaches: Too Many Priorities

♦ The Boulder Tapes
(4.5 hours of content produced by Jay Johnson)

♦ Origin and Philosophical Basis of Feed the Cats

♦ A Football Coach’s Guide to Feeding the Cats